Baby led weaning basically skips the whole puree stage and gives your baby soft and edible foods. BLW foods should be soft-cooked and mashed into small manageable pieces. Babied can also try eating a hunk of apple, or go the route of soft cooked apple pieces. It is up to the parents discretion to decide what types of foods they want their baby to have. 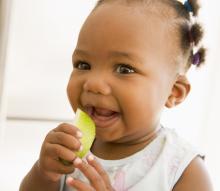 the cooking, the cutting or mashing and the offering of the foods and your baby does the rest.  It is important to note that your baby should be in control of what he is eating and you should never actually feed him by putting the foods into his mouth!