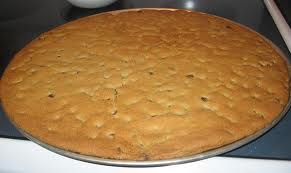 The chocolate chip cookie was invented by Ruth Graves Wakefield. She owned the Toll House Inn, in Whitman, Massachusetts, a very popular restaurant that featured home cooking in the 1930s. Her cookbook, Toll House Tried and True Recipes, was first published in 1936 by M. Barrows & Company, New York. The 1938 edition of the cookbook was the first to include the recipe “Toll House Chocolate Crunch Cookie” which rapidly became a favorite cookie in American homes.

Ruth Wakefield stated that she deliberately invented the cookie. She said, “We had been serving a thin butterscotch nut cookie with ice cream. Everybody seemed to love it, but I was trying to give them something different. So I came up with Toll House cookie.”

A different version of events says that Wakefield is said to have been making chocolate cookies and on running out of regular baker’s chocolate, substituted broken pieces of semi-sweet chocolate from Nestlé thinking that they would melt and mix into the batter. They did not and the chocolate chip cookie was born.

A still different history of the cookie derives from George Boucher, who was at one time head chef at the Toll House Inn, and his daughter, Carol Cavanagh, who also worked there. Contradicting Nestlé’s claim that Wakefield put chunks of chocolate into cookie dough hoping they would melt, the daughter stated that the owner, already an accomplished chef and author of a cookbook, knew enough about the properties of chocolate to realize it would not melt and mix into the batter while baking.

Boucher said that the vibrations from a large Hobart electric mixer dislodged bars of Nestlé’s chocolate stored on the shelf above the mixer which caused the chocolate to fall into the sugar cookie dough mixing below. He claims to have overcome Wakefield’s impulse to discard the dough as too badly ruined to waste effort baking them, leading to the discovery of the popular combination.

In a large bowl, cream the butter and sugars. Add the eggs, beating well after the addition of each.

In a bowl, combine the flour, baking soda, and salt and mix with a whisk. Add to the butter mixture, mixing to incorporate, and add the vanilla extract. Fold in the chips. Spread across the bottom of the prepared pan and bake until the edges are golden and the cookie is set but the center is still slightly soft, 20 to 25 minutes. Cool in the pan for 10 minutes, then transfer to a wire rack to cool completely.