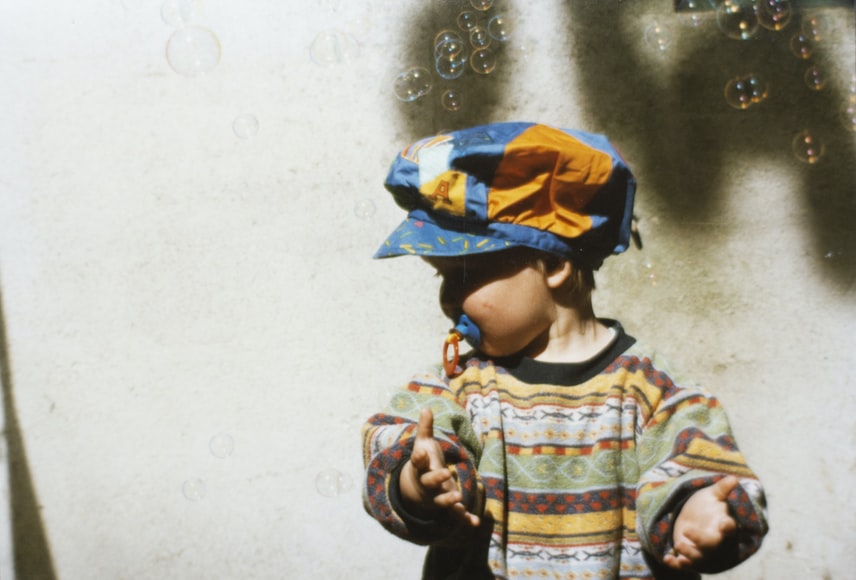 HISTORY OF THE PACIFIER 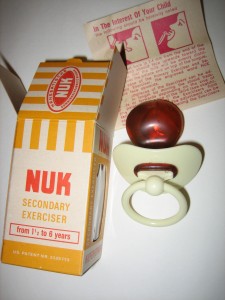 The pacifier has been called many names. The Brits and Canadians refer to it as a “Dummy”, binky, and soother are used at other locations around the globe. We all have our own names for the rubber, plastic, or silicone devices. Where exactly did the pacifier originate?

The original pacifier was actually a corn cob. The wife of an English farmer gave it to her baby during the 1680s. The corn cob worked as a replacement for the mothers sore nipple, allowing the baby to soothe themselves, thereby providing the mother with some much needed relief. During the 17th-19th centuries in England, the term “coral” was used to describe a teething toy made of coral, ivory, or bone that was often mounted to a piece of silver. These materials were often said to symbolize animal strength and help the child cope with pain. In 19th century America, sugar tits, sugar-teats, and sugar-rags were being used. A sugar teat was made with a small piece of linen wrapped around a piece of sugar with a  string tied around it. Some Americans had even coated the cloth with Brandy. (The picture to the right shows a NUK 1950′s Secondary Soother for children 18 months to 6 years!) 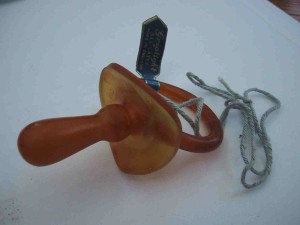 Pacifiers began to get their modern appearance around 1900 when the first teat, shield and handle design was patented in the US as a “baby comforter”. Rubber had been used in teethers sold as “elastic gum rings” for British babies in the mid-19th century, and also used for feeding-bottle teats. In 1902, Sears Robuck & co.  advertised a “new style rubber teething ring, with one hard and one soft nipple”. And in 1909 someone calling herself “Auntie Pacifier” wrote to the New York Times to warn of the “menace to health” of “the persistent, and, among poorer classes, the universal sucking of a rubber nipple sold as a ‘pacifier’.” This was referring to the dental dangers of the pacifier. In England too, dummies were seen as something the “poorer classes” would use, and associated with poor hygiene. (Pictured to the right is the all rubber 1950′s Griptight soother.) 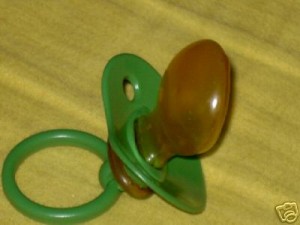 Early pacifiers were manufactured with a choice of black, maroon or white rubber, though the white rubber of the day contained a certain amount of lead. Binky (with a y) was first used as a brand name for pacifiers and other baby products in about 1935 and is currently owned by Playtex Products, Inc. as a trademark in the U.S. (and a number of other countries).

Interestingly, the pacifier has come to where it is today. It has made numerous scientific advances since its origin and remained nearly constant since the mid 1950′s. Pacifiers are now used by children of all ages, races, and backgrounds. Many mothers do not know what they would do without them! (Pictured to the right is a 1980′s NUK size three pacifier for 3 year olds!)